1850: a worthy ancestor of the trolls

This article is a short study of a stampless letter whose content suggests that trolls have always existed.

1 – Analysis of the cover

3 – Research in official documents of the time

1 – Analysis of the cover

This letter was written in the vicinity of Wittes, a small town in the postal district of Aire-sur-la-Lys located in the North of France. This is the deep countryside of Pas-de-Calais (French "département"). The letter is written in French.

It is a postage due letter for the same postal district which was posted in the post office of Aire-sur-la-Lys. The post office worked on Sundays at the time, so it took charge of it on July 21, 1850 and affixed its circular date stamp (CDS) type 15 (mark 1 on the photo). A postman took care of transporting it to its recipient to claim the decime (ten centimes) of postage.

The postmark CL (2) stands for Correspondance Locale (Local Correspondence) and that "I" (3) indicates the amount of the tax of 1 decime to which it is subject. This is the rate applied for local letters since the law of 1829.

The recipient is a farmer, it is indicated in the address, his name is Louis Laigle (4). 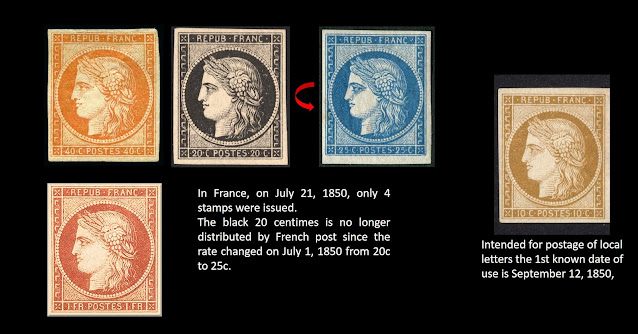 This is the beginning of the use of stamps in France and few people use them. The postal reform, the creation of the 1st French stamp is still recent, on January 1, 1849. Over time and as tariff changes favor the use of postage paid and therefore the stamp, the trend will be reversed.

Today, social networks are frequented by a very heterogeneous population, including a population called trolls, that is to say stupid and wicked individuals, often abusive and anonymous. This letter was written by a kind of 19th century troll who could well be the worthy ancestor of those of today.

The sender of the letter and its addressee are close in distance to each other. It's curious to write a letter for such a close recipient, it may indicate that whoever wrote it had less than laudable intentions, and indeed...

The letter is written in a French far from the classic Parisian canons of the 19th century, the syntax is bad as is the writing, some words can’t be deciphered.

This letter is ironically titled "faire-part" (announcement) in reference to the marriage the letter is about.

The redactor comments in unflattering terms on the marriage of Réant and Mouflin, whose families he doesn’t seem to appreciate.

- their fathers aren’t left out, since one is an “assassin” (C) and the other “the most famous robber in the department” (D). Just that...

He ends his letter by writing that both bride and groom can only frighten the administration, if we extrapolate his words, it is the alliance of evil with evil...

The letter is signed but the signature is indecipherable, it is surely a pseudonym.

3 – Research in official documents from the time

Was there a marriage in this town between the 2 people mentioned in the letter?

After some research, like a genealogist, I found in the marriage registers of Wittes something which corresponds exactly to the names of the letter and the date.

I’m far from having unlocked all the secrets of this letter, it is what makes its charm too. Questions will therefore remain unanswered because I haven’t found any connection with any assassin or assassination in 1815, nor any relationship with the recipient.

A few hypotheses among many others…

The recipient, Mr. Laigle had, in addition to being a farmer, perhaps responsibilities in the local administration. The writer of the letter by defaming these 2 families wanted to sully their reputation with the local authorities and thus satisfy a revenge whose causes will remain unknown.

The descendants of the Réant and Mouflin families may discover this dirty story. I hope they don't blame me for exhuming such bad thoughts with this article.