This article is the continuation of the article « A treasure discovered in a book in 1931, part I ». It deals in particular with the La Fayette sale which took place in 2003 and in which the block of 4 of 1 vermilion franc tête-bêche was in sale.

3 - In the hands of the most prestigious collectors

4 - The sale of the prestigious La Fayette collection

This block is therefore sold by Mr. Boscus to Mr. Champion through Mr. Georges Behr who cuts it into 1 block of 8, 2 vertical pairs, 3 horizontal pairs and 1 block of 4 which includes the tête-bêche. 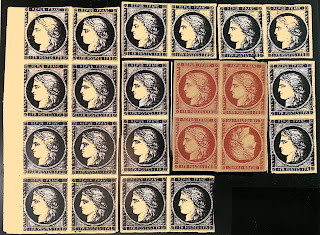 The first owner of the block of 4 of the 1 franc vermilion tête-bêche was Théodore Champion.

In 1899, he arrived in Paris and became an employee of the stamp dealer Forbin. He will buy this business in 1902 which is located at 13 rue Drouot in Paris in a district which was for a long time the nerve center of the Parisian philatelic trade as the concentration of stamp dealers was important there. This stamp shop still exists today and still bears his name.

This Mr. Champion had the distinction of also being a champion (it can’t be invented !!) international cyclist. He was notably Swiss champion on several occasions.

He manages to impose the collection of mint stamps while the collectors of the beginning of the 20th century collect them canceled. He quickly became the most important Parisian stamp dealer, and was elected a member of the Academy of Philately in 1948.

Théodore Champion dies in 1954. The block of 4 is sold to Mr. Ballat, about whom we have little information. It was around this time that the block was ungummed. This practice was common because collectors feared that the gum would alter the fresh color of a stamp.

3/ In the hands of the most prestigious collectors

The block of 4 will then pass into the collection of Mr. Maurice Burrus (1882-1959), politician and from a wealthy family of tobacco industrialists, who was one of the first members of the Academy of Philately in 1928.

In 1955, he was invited to sign the Roll of Distinguished Philatelists. His collection was known to include the rarest Swiss and French stamps.

In 1959, the majority of the French stamps in his collection were bought by General Robert Joshua Gill (1889-1983) from Baltimore, a great collector of French stamps whose collection had won a gold medal at the FIPEX in New York in 1956.

Gill exhibited its masterpiece in Washington at the SIPEX exhibition in 1966, where it won the international grand prize.

In 1991, it will be sold at auction by David Feldman to a buyer who is said to be American without further information.

The eminent philatelist Norman Hubbard places in his prestigious list of Aristocrats of Philately this block of stamps among the 10 greatest rarities in world philately.

In 2003, the Spink house, founded in 1666, world leader in auctions of collectibles and the Behr house, founded in 1920, specialist in rare French stamps were commissioned to disperse a private collection made up of the greatest rarities of stamps French classics. According to the "Times" of London, this collection belongs to a wealthy American industrialist who wishes to remain anonymous and who has chosen the pseudonym of "La Fayette". In this collection, there is the famous block of 4 Ceres 1 franc vermilion tête-bêche.

Pascal Behr : "I refuse to divulge the names of the buyers, indicating only that they are 80% French private collectors, all under 55 years old. As for the new owner of the famous block of 4, he is a wealthy French businessman who spends a lot of time with his collection. I believe he had come to buy this piece." Pascal Behr is the son of Bernard Behr (1924-2022), and grandson of Georges Behr who founded the family company and cut the block of 20.