Philately without Experts? by Sperati

“La philatélie sans experts ? “, in English “The philately without experts? is the only book published and written by Jean de Sperati, the famous forger who defined himself above all as an artist. This article presents the content of this book. 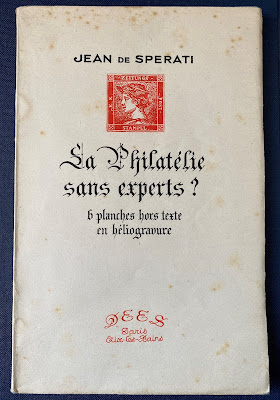 1 – Short presentation of the author

3 – Appendix: articles from some newspapers in 1945

4 – The reasons for writing such a book

1 – Short presentation of the author

Jean de Sperati, born Giovanni Desperati on October 14, 1884 in Pistoia, Italy and died on April 27, 1957 in Aix-les-Bains, France, was an Italian forger who practiced in France. His talent as a counterfeiter is considered one of the most successful in the field of philately because his "creations" were recognized at the time as authentic by many experts. 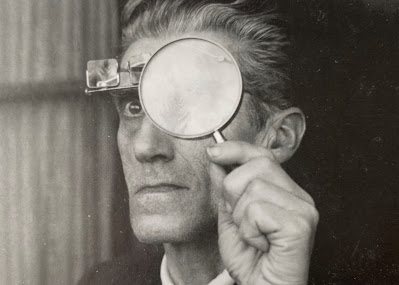 Sperati always presented himself as a disinterested artist and he said he never sold his copies as genuine stamps. “Art philately”, as Sperati calls its activity. He used his knowledge of photography and printing and to reproduce both lithography and intaglio. He sometimes used genuine paper taken from the edges of sheets and recycled low-value stamps.

Before discussing the content of this book, I would like to point out that this book isn’t Sperati's only book since he had planned to write "Confidences aux experts". This project was still well advanced since there are a hundred copies entitled "La technique complète de la Philatélie d’Art", all typed on a typewriter, this book is dated 1953.

“La philately sans experts”, the book treated in this article, looks more like a booklet. It has 125 pages and at the end there are some photogravure reproductions of stamps.

The book was printed by Imprimerie Nouvelle in Paris in June 1946.

After a few generalities on « timbromania », philately and the stamp trade, the author evokes the pseudo experts, the philatelic literature of more or less good quality and connects a first part devoted to what he calls with a certain disdain the merchandise. He deals with paper, watermark, gum, colors etc. and printing techniques. You can tell he knows his subject. Obviously, a forger must know what he is copying.

The 2nd part is a detailed study of the stamp, going from the necessary tools to the collector, both material and intellectual, never omitting to speak about what is the strong point of Sperati, the manipulations and the alterations. Concluding this part, with imitations as if to leave it to posterity that imitations are much more beautiful and interesting works than the originals. This is what he calls Art Philately. According to him, "Art Philately will live with its old mother, philately".

3 – Appendix: articles from some newspapers in 1945

The author ends his book in a strange way, as he lists a series of newspaper articles that refer favorably to the author in his work as a forger. It must be said that the book written in 1946 was not by chance, it was written just after a lawsuit that the administration brought against him initially for tax evasion. Yes, you read that right, “tax evasion”. I will explain to you :

During the Second World War, Sperati's business was good, many customers from all over the world bought him high value stamps that were easier to hide than other precious items. Except that one day in 1942, customs seized a package bound for Lisbon. Believing the stamps to be authentic, the customs accuse him of not having declared the real value of the stamps that are there and want to have him condemned for tax evasion.

Sperati will then have a singular defense which in fact isn’t a defense but rather he will seize the opportunity of this court to stage himself and ridicule the experts he hates so much. He will admit that they are forgeries, except that no one will believe him, not even the experts commissioned by the court, his work as a forger is of such quality.

To avoid the ruin that the penalty would cause, Jean de Sperati is obliged to present to the court the evidence of his forgery techniques. And in the end, the court acquits him on the charge of tax evasion and he gets away with a fine for having interfered with the work of the customs officers.

Some extracts from the newspapers of the time presented in the book:

Le Dauphiné Libéré: “This surprising imitator, the most skilful of the century for sure. »

Le travailleur alpin: “Yesterday, in a small villa, I interviewed a man who seemed to me to be a great scientist. »

Le Progrès: “Alone against all, the struggle is unequal; against a man alone with his faith, his secrecy and his research, stand in hurrying battalions the thousands of experts from all over the world”.

Forces Françaises: “This stamp would be worth 1,300,000 francs. Only it is false but my philatelist heart can’t help but beat at the sight of this miracle. There isn’t other word to call this work of art and high precision. »

He could only get away with a simple fine. The Trade Union of Stamp Dealers sees him as a formidable threat to the stamp trade. In 1952, a complaint was brought against Sperati for producing false collector's stamps. The judgment condemns him for fraud. Sperati appealed but the Court of Appeal confirmed the first judgment and sentenced him to two years in prison. His age (68) will lead to the leniency of justice and will prevent him from being imprisoned. He will die at 72 in Aix-les-Bains and some say that his death was due to all the chemicals he used to make his counterfeits.

4 – The reasons for writing such a book

Forgers have always approached the works of the greatest geniuses as closely as possible to understand and reproduce them, especially in painting. They have often said to themselves that they deserve more recognition for a profession that is certainly illegal but which requires undeniable talent. Sperati, even if he took advantage of his talent, certainly felt the frustration of not being recognized as a true genius in this field which he describes as Art philately. All his life, he will seek this recognition.

This book is above all a means for him to present this artistic work before being a technical book on philately. There are interesting passages on what he calls the raw material of stamps (paper, colors, inks and gums) as well as what relates to manipulations or alterations.

What did Sperati mean with the title of his book?

In his last book never published, Sperati gives some information: "I had intentionally placed a question mark because I wanted to affirm that one couldn’t rely on the expert, not only that would have been wanting to consider the situation under an ultra pessimistic point of view that doesn’t correspond to reality, but this would have been likely to discourage a large number of philatelists who, aware of the dangers they may incur during their acquisitions, find in the expertise the only alleviation of their fear. ».

I end this article with this excerpt from an article in the Dauphiné Libéré of Dec. 22, 1945 placed at the end of the book by Sperati as if he had wished to state his wish for posterity: « The famous imitator will henceforth devote his time to the writing of his next books and to work on his artistic series of "copies" which are likely, in a few years, to be worth more than the genuine stamps.»