Two questions: why this overprint and why, in the end, was this stamp not issued?

1 - Presentation of the stamp

3 - Why was it never sold in French post offices?

5 - The oldest evocations of this overprint

1. Presentation of this stamp

It is a type II 10c with the effigy of Napoleon III, bister color, on which there is « 10 » overprint blue. 200 million type II stamps (without overprint) were issued and principaly used for local letter rate.

Its printing is fine like the overprint which can be dark blue or light blue.  The false overprints, and there are some, are often coarse with a thick foot for figure 1. Mine of my collection is light blue (see photo below). 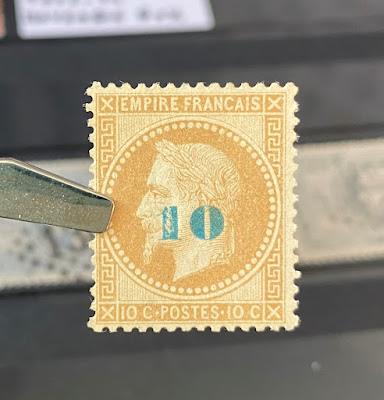 The period of the printing of this overprint is estimated during the summer 1871, after the Franco-Prussian War (July 1870-May 1871).

The French Postal Museum holds a certain quantity, their existence is indisputable. It is also referenced in the catalogs. Its Yvert and Tellier value in 2022 is 3,000 euros ($3,400) and 1,300 euros ($1,500) without gum. This stamp exists canceled as I show in chapter 4 but it isn’t listed in catalogues due to its late use.

This question has been asked for more than a century because if the French postal administration is well kept, rigorous and precise, for this overprint, there isn’t official document. So we can only make assumptions.

The most believable is this. The postal administration wanted to avoid any confusion with the 15c bistre, issued on Sep. 1871 with the same color. This stamp was however in the effigy of Ceres and not of Laureate Napoleon but the similar color could lead to real confusion. And it made it possible to use the large stocks of 10c Laureate before having a 10c Ceres available.
One could say that the 10c Ceres issued in Oct. 1870 (Y&T #36, Sc. #54) also in bistre color should have had this overprint. In fact, there were far fewer stamps of this type after the Franco-Prussian war than the 10c Napoleon, the printing of which had even been undertaken during the Paris Commune (revolutionary government which took power in Paris from March 18 to May 28 1871).

3. Why was it never sold in French post offices?

Unless it was the effigy of Napoleon III, who had just fallen, which led to the destruction of such perfect stamps. Perhaps France administration wanted to turn the page on Napoleonic III governance and prevent the population from seeing his effigy on all the letters.

To censor the « promotion » of the just deposed Napoleon III would have been the initial idea but which after the tests would have seemed inconclusive since the face remained clearly visible.

4. Used on mail in the late 19th century

Some philatelists or people in the 1890s used it on mail because the 10c rate was widely used and therefore very common. We find letters and even French pneumatics letters stamped with the 10c overprinted, canceled and accepted for its face value.

It is very difficult to say how many overprinted stamps have survived. Anyway, "leaks" took place and several hundred stamps were dispersed to stamp collectors. The beginnings of philately are estimated around 1860, a stamp market had already existed for many years for this type of curiosity.

5. The oldest evocations of this overprint

1907: Arthur Maury, in his book « Histoire des Timbres-Poste Français », evokes a letter dated on Nov. 8, 1871 written by the Director General of Posts which informs the Minister that he has brought in the 10c stamps, whose color is identical to that of the 15c which produces unfortunate confusion. There remain, according to Maury, 600,000 stamps 10c of the empire in store. He adds “it was said that” these overprinted stamps had been prepared in anticipation of postage on New Year's Day, but that they had not been used since the ordinary stamps would have arrived in time.

1891: in a book written by Louis Leroy (former deputy bureau chief at the central postal administration) and entitled "Histoire du timbre-poste français", in chapter VII « Stamps not issued but prepared », "the overprint was realized by the national printing office in August 1871 (editor's note: which contradicts the letter mentioned by Arthur Maury), when the 15c bistre Cérès were produced. We wanted to keep this color for the local rate which was going to be raised from 10 to 15c and we also wanted to use the important stock of the 10c stamps with the imperial effigy. To distinguish these stamps of different facial values and effigies, but of the same color, we thought of overprinting; it was abandoned almost immediately and the overprinted stamps were destroyed. »

To end this article: The color of a stamp helps the one who checks the postage, so he can work quickly and well. When the color of stamps with different face values is identical, this can lead to errors of appreciation. This overprint would certainly have helped postal agents of the 1870s who worked by candlelight or kerosene lamp in conditions we can no longer imagine.