How to collect the first French stamp

1- Presentation of the stamp

1- Presentation of the stamp

If it's listed in catalogue as number 3 in the Yvert & Tellier and Scott classification, it’s because the first series of French stamps are first classified according to the face value of each stamp (nb 1 and 2 are the bister 10c and green 15c). This stamp is intended for postage of office-to-office letters up to 7.5gr inclusive.

Six panes, known in French as galvano (solid-copper printing plate), of 150, forming three plates were used to print this stamp which includes a tête-bêche. Unlike the British One penny Black, plating is very difficult to achieve.

The paper used is not uniform. The thickness can be between 60 to 80 microns, so the paper of a stamp can be described as thin to thick (average thickness = 70-75 microns).

The most spectacular variety of paper is the one called "chamois" and which is very dark yellow.

The surety background which can be straw yellow to colorless white and which will determine the two main « colors » of stamps, black on yellow or black on white.

The ink varies from intense black or weak black which gives the variety of gray color.

The black 20c has been canceled in various ways. 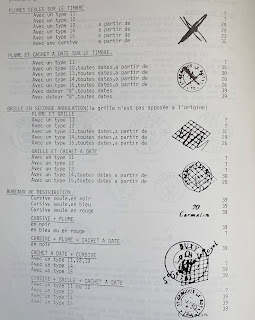 As soon as the stamp was put on sale and before the arrival of the grid to cancel, the offices used makeshift means to cancel the stamps. There are cancellations made with a quill (black ink) which have different shapes sometimes specific to a city (so a well-identified post office) to which a CDS (Circular Date Stamp) has sometimes been added. 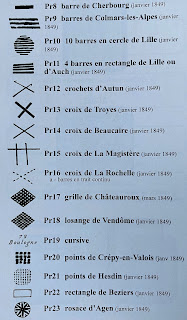 The CDS is interesting because it can make it possible to date the use of the stamp. 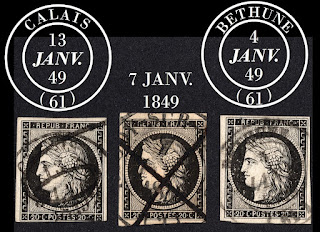 These stamps canceled before the arrival of the grid are highly sought after and their value is significant. There are several types of CDS (see below). 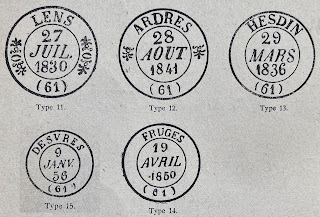 The use of the grid is known from Jan. 10, 1849. There is a grid characteristic of the town of Châteauroux (see below). 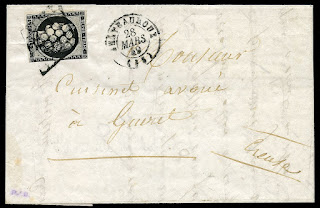 The red or blue cancellations are very rare and be careful there are lot of fakes.

When the stamp was withdrawn from service, it was canceled by a diamond of dots (81 dots) or by the star of Paris. 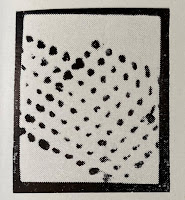 It's a bit the same principle as the stamp. Covers franked with the black 20c and approaching January 1st are the most sought after. 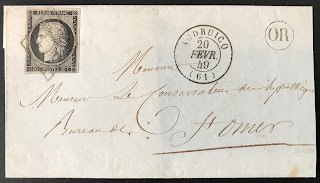 When the cancellations are different from that of the current grid, the value explodes.

A cover send just the day before the change of tariff (June 30, 1850) is also interesting.

On the other hand, it’s easy to find beautiful covers with a canceled stamp with the grid for a reasonable price. These letters are affordable when sent from a major city where a large number of letters have been sent. For some small towns, they have a higher value because they are rarer. This book below can allow you, even it’s bit old today, to have a rarity indicator for each letters. 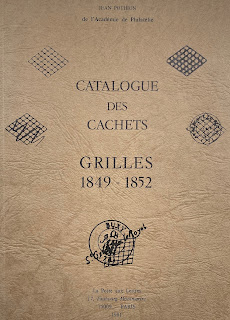 This chapter deals with the printing of stamps which haven’t been used for the franking of letters.

The 20c black Ceres is part of the stamps reprinted in 1862.

In February 1862, following the request for a collection of French postage stamps by Sir Rowland Hill (inventor of the 1st stamp, the penny black), the French postal administration realizes that no specimen of the series has been officially collected. It is therefore decided to reprint the stamps no longer current as well as those in use in order to satisfy Rowland Hill and create various collections. These stamps aren’t simple copies, they were printed with exactly the same material as the stamp of 1849. It is collectible and has little nearly the same value as that of 1849.

There are very few die proofs with the effigy of Ceres that can be dated to 1848-49. For color trials or essays in general, they are difficult to date and many date from 1870 for the so-called issue of the Cérès siege of Paris. I therefore don't advise you to collect them if you focus on the 20c black.

There are also stamps from the make-ready sheets.

They are sometimes difficult to differentiate, so trust an expert or a recognized seller.

The significative variety is the accordion fold and I don’t consider as a variety what I call fly's feet which have no interest.

With all these informations, you can start a collection of the 20c Black Ceres of 1849. Building a stamp collection isn’t just about lining up different stamps in an album. Sometimes collecting the same stamp with all its aspects can compose a collection that will not only enrich you intellectually but can also have a great commercial value.