This article is an introduction to palaeography which allows to decipher the writing of old letters. This study is done with French letters (16th-17th centuries) but it can be transposed on letters written in other languages which use the Latin alphabet.

Far from being an expert in palaeography, I wanted to write an article on this subject because being passionate about postal history, I happened to have in my hands letters dating from the 17th century but I remained frustrated because I didn’t understand a sentence of the content of the letter or even to whom this letter was addressed.

Everything seemed unreadable to me. By documenting myself a little, I saw that we could decipher these letters by having some basics in palaeography, a practice that genealogists master better than postal history enthusiasts. I also realized that French at that time was a language used in Belgium, Switzerland, Quebec, Germany and the Netherlands.

Paleography is the study of historic writing systems and the deciphering and dating of historical manuscripts, including the analysis of historic handwriting. It is concerned with the forms and processes of writing.

Included in the discipline is the practice of deciphering that is here what interesting us to unterstand the content of a letter or recipient's address.

Paleography could be write « palaeography » in UK. This word comes from Greek: παλαιός, palaiós, "old", and γράφειν, gráphein, "to write".

The letters begin to be easily readable from the end of the 17th century. The writing is very similar to ours and apart from a few words or abbreviations, it’s easy to read the letters written after 1700.

Before 1700, the vocabulary can be confusing because the terms used are unknown to us because they have fallen into disuse. It’s not useful to retain the words of this time but only those which appear most often. Some examples: mander : commander, envoyer (order, send) ; onques : jamais (never) ; partant : donc (therefore) ;  ja : déjà (already) ; jacoit : quoique (although).

Sentence constructions or syntax. Often it is close to the Latin “ce disent plusieurs travailleurs” instead « les travailleurs disent ».

The spelling is often very random and maybe very poor, so there are a lot of errors. Or, when it was well written, often by scholars or scripts, the writer mixed the language of the time with that of Latin. Ex: écrire (to write) for escript, écriture (writing): escripture, etc.

Moreover, « z » was used as the plural as well as the "s", "u" or "v" being the same letters. The writing was also phonetic, which greatly complicates reading in our time.

Many letters have no punctuation (no trailing period, comma or apostrophe) which makes reading very difficult.

Abbreviations were also very common to be able to write as much information as possible on paper, which was an expensive product. These abbreviations remain unintuitive today.

But first at all, before understanding the words, you must first decipher them and therefore decipher the letters (symbols or characters) that make up these words.

Before this period, we don’t find manuscrit postal marks because the institutional postal service didn’t exist and if we find some, they are marks which made it possible to indicate the remuneration of the private messengers who had transported the mail, which remains all also very interesting to collect.

After this period, the letters can be read without great difficulty because the so-called "coulée" writing has become the norm, it very closely resembles ours today.

The letters of the XVIIth century are interesting because they knew the birth of the postal service as we know it today.

One can discover there postal marks which often were indications to remunerate the service or more handwritten postal marks indicating the post office of origin which had treated the forwarding of the letter.

Some marks can only be “understood” by deciphering the writing.

First of all, it is important to decipher the date, if there is one.

In terms of content, the recurrence of words and their writing make it possible to progress in the deciphering of a letter. You have to take small steps, and come back to the letter as much as necessary, time is a good ally.

Create a Word file, and go line by line respecting the format of the handwritten letter, leave blanks when the words are indecipherable. A letter will not reveal all its secrets to you on the first day, it takes a lot of work to fully decipher it. Take the help of books on the subject which compile the writings of the most common words, the abbreviations used at the time, figures, units of measurement, etc.

I can only advise you to "equip" yourself with a tool, a simple book in which you will find a large sample of the forms of writing from this period (16th & 17th centuries) of the most used words and figures in all their forms (dates, measures / weights , currencies, etc.). 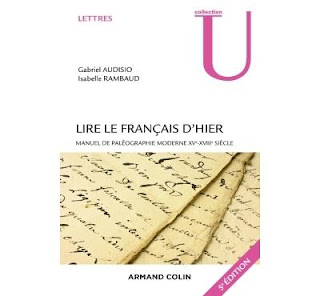 For my part, this book "Lire le français d'Hier" is enough for me in my "postal" research. I found everything I need in this book.