The laurel wreath of Napoléon III

This article deals with the French stamps called Laureate Napoléon which replaced those without laurel issued during the reign of Napoleon III.

1- The stamp, a symbol of power

1- The stamp, a symbol of power

The stamps are always been an illustration of the political power of the issuing country. This was even truer in the 19th century. The stamp featured an emperor, king, president, etc. Beyond the portrait, it was the symbol of a political system. When a change happened, for example in the case of a dynastic succession or a change of political regime, the country was busy creating a new stamp representing the new symbol of power. 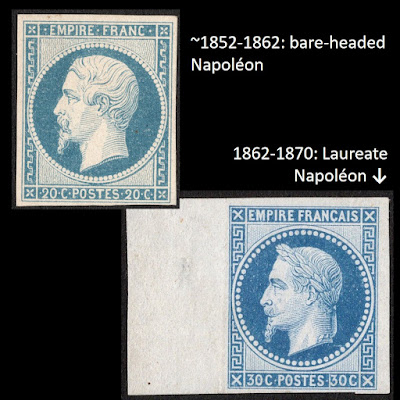 The transition from the bare-headed Napoleon stamp to the laureate Napoleon doesn’t correspond to any political change, nor to any dynastic succession. It could be simply the « fait du prince », a French expression which designates an arbitrary act of a head of state. The « fait du prince » is so named because it was, under the Old Regime, the prerogative of the sovereign. His divine status allowed him, in the event that no law provided for a restriction on his power, to make arbitrary choices.

In this case, it was a choice whose real initiator can’t be precisely defined. It is perhaps a current that we could call nostalgic for neo-classism, which the Emperor Napoleon III certainly embodied and which his wide entourage encouraged.

However, this addition of a laurel wreath on the stamp was in line with what had just been done for the Napoleon coin.

In Sep. 1870, during the Franco-Prussian war, the emperor was taken prisoner. He left France definitively to go to Prussia and be interned there at the castle of Wilhelmshöhe. Napoleon III is the fourth French sovereign to be captured on a battlefield.

Napoleon III was brought up to worship his uncle Napoleon 1st and unconsciously or knowingly he certainly wanted to imitate him. Like his uncle, Napoleon III is linked to wars of conquest, such as that of Italy in 1859 where famous battles were won against Austria at Turbigo, Magenta and Solferino.

At the head of his armies, he can claim these victories against François-Joseph 1st and therefore order that the coins display a triumphant leader crowned with laurels like the generals of the Roman Empire when they won a battle.

3- The actors in the creation of the "Lauré"

At the beginning of 1860, Désiré-Albert Barre, chief engraver, received the order from Théophile-Jules Pelouze, Chairman of the Coins and Medals Commission, to produce a model intended for the coins of the empire which would be submitted to the approval of the emperor. The coins of the laureate-headed emperor will be put into circulation from the beginning of 1861, for the stamps, it will be necessary to wait a little longer. 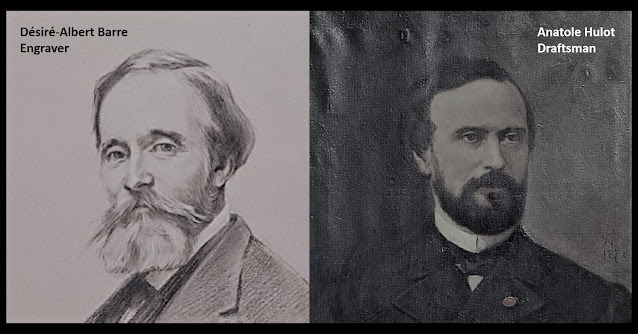 Some tensions existed between Désiré Albert Barre (1818-78) and Anatole Hulot (1811-91). The first is the son of Jacques-Jean Barre (1793-1855) engraver of the first French stamp and Anatole Hulot, assistant engraver, was appointed, just before the creation of the Lauré stamp, director of the manufacture of postage stamps. Hulot will be commissioned to design the laureate effigy and the frame that will make up the new so-called laureate stamp, while Barre will only be the engraver. The effigy of Napoleon III appearing on the coins very closely resembles that of the stamps.

The Laureate Napoléon stamps, compared to those issued so far by France, were innovative because there were different models depending on the face values ​​(1c, 2c, and 4c stamps were different from the other average values ​​from 10c to 80c) and there was a 5 francs stamp which was exactly twice the size of the existing stamps. 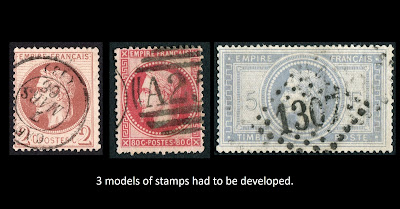 This was cause an increase in workload to produce this issue, in particular for the design of the dies and the plates. 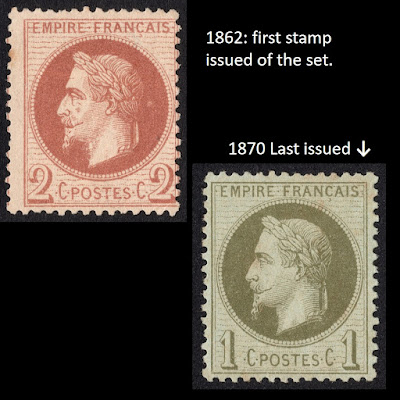 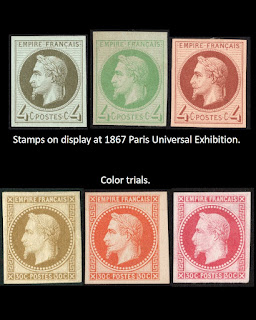 The Napoleon Lauré stamps were also used in the French colonies, these stamps were not perforated. Care must be taken not to confuse them with the so-called Rothschild issue. 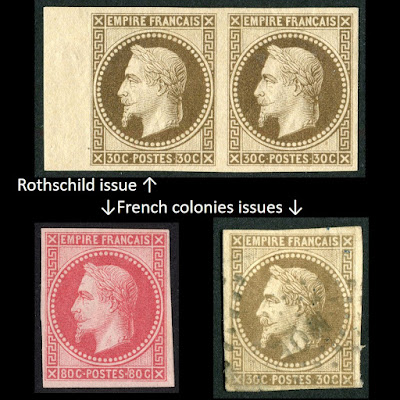 They can be differentiated by their color but the best is to trust a real expert or recognized seller.

I highly recommend the book by Michèle Chauvet from the Academy of Philately, "L'empire Lauré", publisher JFB Philatélie (2020) which is the most complete book (written in French) on the subject. 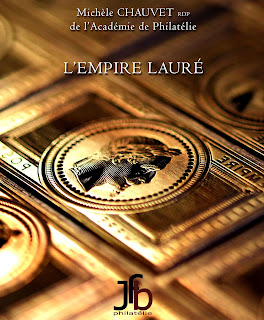 Editor's note: All stamps pictured in this article belong to my personal collection.