This letter originally purchased for its postmarks turned out to be interesting for its connection to the end of slavery in Jamaica. 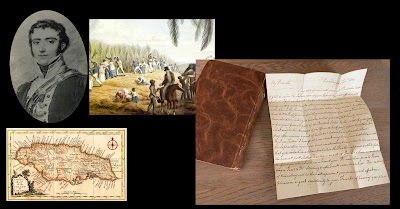 This article therefore relates to a large extent the content of the letter by placing it in its historical and family context thanks to the book* written by the son of the recipient and which is often referred to.

* John Irving of Ironshore and his descendants 1713-1918, written by Sir Æmilius Irving.

2- The recipient of the letter

5- The life of Jacob Irving in Canada

It is a postage due letter dated Jan. 11, 1834 sent from Edinburgh (Scotland) to Boulogne-sur-Mer (France) and entered in this country via Calais (mark n°5: ANGLETERRE PAR CALAIS). 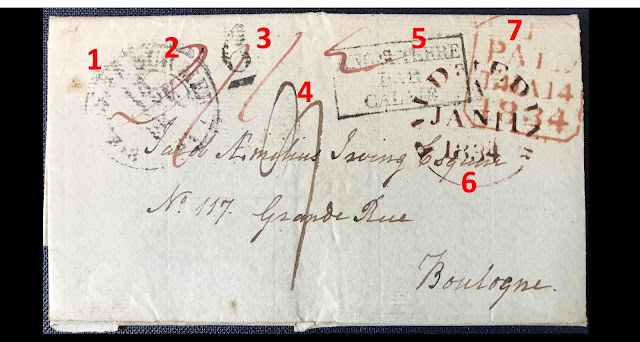 n°3: Black “underlined” stamp of 6d to be reimbursed at the foreign border post office for transport in UK.

The estafette* service between Calais and Paris made it possible to reduce the travel time for mail between London and Paris from 60 to 36 hours. It involved a tax of 3 decimes which will be definitively abolished on June 26, 1836. The estafette also benefited the town of Boulogne-sur-Mer, but given the distance, the associated tax was reduced to one decime.

2- The recipient of the letter

This letter dated Jan. 4, 1834 was sent from Edinburgh by Alex Mudie (see chapter 3) to Jacob Æmilius Irving Esquire when he resided  at 177 Grande Rue, Boulogne (France).

Jacob Æmiluis Irving was born in 1797 in the United States in the city of Charleston (South Carolina). His family owned a sugar plantation in Jamaica of 4,404-acres and 473 slaves. During his childhood, in 1803, he left Jamaica for health reasons with his mother and 2 brothers to go to England. It is finally in South Carolina that they will settle in the Corbett family (the parents of the mother Jacob Æmiluis).

His mother left her children in Carolina where they raised by her parents from 1805 to 1809 and joined her husband in Jamaica. In 1810, the whole family went to England to take advantage of the quality of education that this country can deliver to children. His father died in 1816 and he inherited a 1/3 of his properties in Jamaica but also some debts...

From 1814 to 1817, Irving served with the 13th Dragoons, rising to the rank of lieutenant. He fought at the Battle of Waterloo and was stabbed in the head during a charge. In 1818, he is placed on half pay following the reductions in staff linked to the end of the war.

In 1821, he married in Paris Catherine Diana Homfray (see below for some details).

The couple were parents to eleven children, but only five reached adulthood.

In 1834, a few months after this letter, Irving family emigrated to Canada.

This letter was written by Alexandre Mudie (1763-1844) who was a lawyer in Jamaica. He was a member of the family through his marriage to Elizabeth Motte Erskine. He mainly worked with the owners of sugar cane plantations. He was also a slave owner. He helped these owners lose as little as possible after the abolition of slavery in Jamaica. At the end of his life, he lived in Edinburgh (~1826) in Scotland where he died there on Feb. 17, 1844.

Jacob Æmilius lived in Boulogne from May 1821. He lived there in different accommodation until June 24, 1834. France was a base for the Irvings since family lived there (Homfray family). 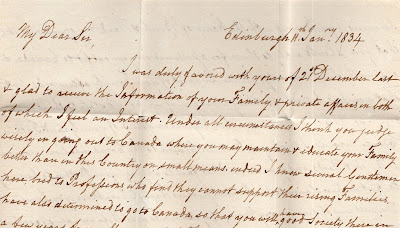 Alex Mudie responds to a letter from Jacob Æmilius dated Dec. 21, 1833. He believes that Jacob Æmilius is acting wisely in intending to go to Canada rather than stay in a country that he believes has small means to maintain and educate his family. He wonders about his status as an officer in half pay if his departure is confirmed. He asks him why he wouldn’t rather leave from Dublin instead of Boulogne, which would be more economical and allow them to see each other before his departure for Canada.

Next, Alex Mudie brings up a case with the House of Birch Ward. It’s certainly the one concerning the mortgage of the entire inheritance of Jacob Æmilius and the financial arrangements that followed. Mudie advises Jacob Æmilius by giving him a strategy to protect his interests and those of his mother concerning his succession.

His father leaves debts and a complex financial arrangement that is not easy to manage and which persists for years after his father's death.

In the book of the son of Jacob Æmilius, it’s written that Mudie ended his life being very rich and offered (returned?) to Mrs. Irving, the mother of Jacob Æmilius, the sum of a thousand pounds which, one seems to feel it between the lines, could have been given much earlier…

Part of the letter refers to "the compensation for the negroes". These few words deserve attention.

The word “negreos” brings us sadly to the slavery that took place in Jamaica. Jacob Æmilius Irving's father, like his grandfather, owned sugar cane plantations and the workforce was made up of slaves. The slaves were their property and their number was known and referenced.

If the end of the slave trade was obtained in 1807 in the United Kingdom, that of slavery abolition was in 1833 but wasn't really applied until a few years later. In order to preserve the economic balance of the British Caribbean colonies, including Jamaica, the law opted for a gradual exit from slavery. Thus, during a period, varying according to the categories of individuals, of “ apprenticeships” about freedom, the slaves had to provide unpaid work to their former master. Final and generalized emancipation didn’t take place until Jan 1, 1838.

A allocation of compensation to settlers who owned slaves was put in place, which is in fact compensation for the loss caused by the application of the abolition of slavery. 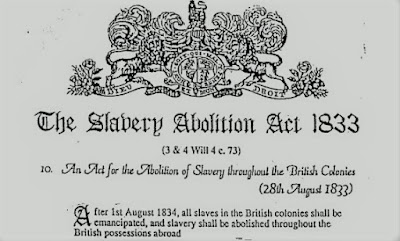 By 1839, 20 million Pounds Sterling (17 billion pounds today!) was paid out to the owners of slaves freed in the Caribbean and Africa under the 1833 Abolition Act, half of whom were landlords residing in Great Britain.

Jacob Æmilius Irving also received compensation, the amount of which is estimated at several thousand pounds, but which he had to share with other members of his family.

These compensations have something revolting today. Jamaica is still asking for justice and for compensation today but the British government, embarrassed, only responds with subsidies to pay some Jamaican construction projects.

5- The life of Jacob Æmilius Irving in Canada

On June 24, 1834, Irving and his family left Boulogne for Le Havre. On July 2, the « Formosa » sailed for New York and after various means of transport, they arrived in the province of Upper Canada in September of the same year.

Jacob Æmilius Irving helped put down the rebellion in Upper Canada, serving on the Niagara frontier.

He settled in Newmarket and was elected to the Legislative Council of Upper Canada from 1843 until his death. Irving also became Simcoe's first district superintendent in 1843. He died at age 59 on October 7, 1856 in Drummondville, Upper Canada.

In addition to the book written by the son of Jacob Æmilius, there’s also information on the Irving family in numerous archives concerning slavery. Far from wanting to make an exhaustive investigation on the subject of slavery or on the Irving family, I have tried in this modest article to make the link between the content of the letter and historical and family facts.