French stamps from Republic to Empire

Article about French imperforate stamp issued during Empire between 1953 to 1862.

2- The first Napoleon stamps of the Empire

3- Some peculiarities of these Napoleon stamps

5- Some examples of interesting postmarks

Napoleon III before becoming French Emperor had been president of France. This status didn’t last long, like the stamps bearing his effigy and « REPUB. FRANC. ». 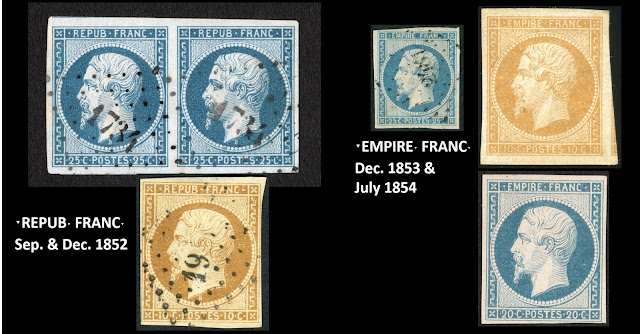 In 1848, the nephew of Napoleon 1st became the first president of the French Republic elected by universal male suffrage (women didn’t have the right to vote). Being limited to a single term and taking advantage of the political divisions of the time, he organized a coup d’état in 1851 and increased his power. A first plebiscite organized with the people extended his mandate by ten years, but it was the second that marked a real turning point. Thus, in 1852, a very large majority of French people questioned said they were in favor of the restoration of the Empire. Louis-Napoleon Bonaparte becomes Emperor Napoleon III.

On Dec. 2, a decree instituted the replacement on the coins of “French Republic” by “French Empire”. This modification was also made to the stamps and the modified die was completed on February 3, 1853. This die took into account the transition from the Republic to the Empire and also had the particularity of removing the letter "B" of the engraver Jacques-Jean Barre which was under the neck.

2- The first Napoleon stamps of the Empire

The stamps of the imperforate Napoleon set are of type I or/and type II. 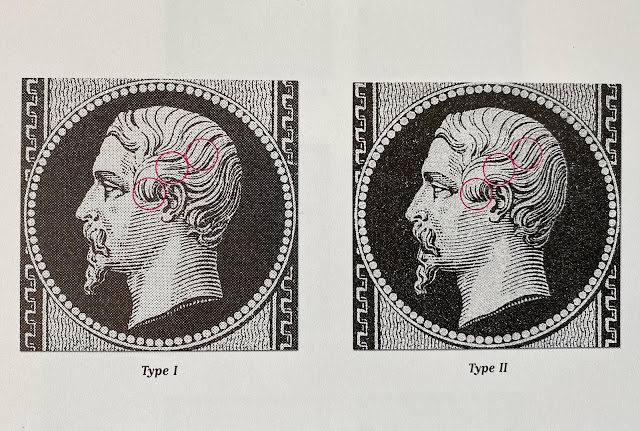 Here is their reference in the Yvert & Tellier and Scott catalogues:

3- Peculiarities of these Napoleon stamps

The shades of these stamps are numerous because the prints were important. The catalogues specify them and sometimes specify the years of issues to which these colors are linked.

The printing paper slightly tinted with the color of the stamp hasn’t always been the same and therefore can bring a particular tint to the stamps. The 20 centimes whose printing was important include many shades. Normally, the paper is very slightly azure but you can find greenish papers, lilac (difficult to distinguish) and even a pinkish paper.

For the 80 centimes stamp, there are two colors. The first color is carmine for the stamp issued in 1854 (x 10 million) following the lowering of the price of triple letters from 1 franc to 80 centimes. This stamp retains the carmine color of the 1 franc issued in 1853.

A fine line around each sheet existed on the first issues, it remained until 1861 and was removed from 1856 on certain plates. Stamps with the visible line have a higher value. 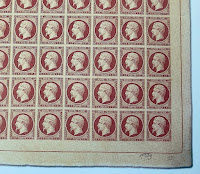 There are also marks called "inter panel wedges" which are even rarer and therefore highly sought after.

The 20 centimes is the value that has been used the most to reconstitute plates.

Plating was very fashionable at the beginning of the 20th century, and even if it is a little out of fashion, there are people who still practice plating because it is an philatelic activity that doesn’t require a lot of money. This stamp is found in bulk and in large numbers.

There are also many color trials that can be interesting to collect as there are different shades.

Beware of color trials approaching issued colors which can be confused and sold as mint stamps usely without gum!

British stamps were perforated long before those of France, the One Penny Red had an official issue of perforate stamps as early as 1854 (1848-50 for experimental forms of separation from Henry Archer).

Before the official printing of the perforate stamps, there are many private trials of perforation, they are called in French "piquage". The best known is the Susse perforation but there are many others that are highly sought after.

It is preferable to buy this type of stamp on a cover or on piece with a CDS which can tell you a little more about its origin. There are a lot of fakes out there...

5- Some examples of interesting postmarks

From left to right: OR (“Origine Rurale”) canceled by a postman during his rounds when he picked up the letter franked with this stamp; grid which can be a late use (city of Bayonne for example) or a cancellation made during the Italian campaign (late 1850s); a roll-cancel of big squared dots from Paris perhaps for a letter destined abroad. 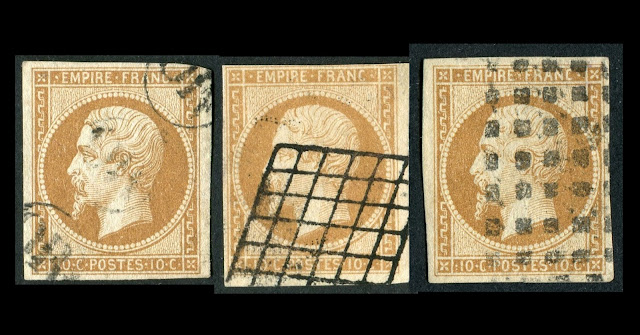 There are always very interesting cancellations to look for…

Ref: photos of type I / type II, listing of shades, corner of a sheet with line and plating from "Le spécialisé, catalogue of Yvert & Tellier, editions 2000 and 1975".

All other photos from @defenderium private collection.