The postal forgery of Oran

The story of the forgery of Oran (Algeria), a Cérès 3rd Republic type of 1876.

1- A stamp to deceive

5- In search of its origin

1- A stamp to deceive

This stamp is the only forgery of a French surface-printed stamp having been printed during the period 1849-1876, which makes it very interesting today for stamp collectors.

It was initially believed that this fake stamp « circulated » in Marseille and Oran.

Oran was in 1870s a French department (see map). Algeria, officially annexed by France in 1848, was divided on Dec. 9 of the same year into three provinces, comprising three military territories and three civil territories erected into departments: Oran, Algiers and Constantine.

As far as Marseille is concerned, this is an error of analysis. This forgery was never found on a letter but only alone cancelled with the lozenge big numeral « 2240 » of Marseille. Which may be normal since it’s most certainly a stamp detached from a letter coming from Oran and canceled on arrival in Marseille after crossing the Mediterranean as it was common for letters delivered to the boat which commuted between Marseilles and Algeria.

The printing of this stamp is very defective with a rough perforation, 14 x 13 ½ like that of the genuine stamp.

It’s lithographed while the genuine is surface-printed. Its color is a light dull blue verging on sky blue with a slight hint of greenish, a color not seen on the genuine 60A, B and C stamps.

The ornaments of the hair are badly drawn and much less clear than for the genuine stamp, the base of the blow doesn’t represent a point to the left, the pearls are too small, the figures and the rosettes are badly made, the vertical frame interior isn’t exactly in a straight line over the full height of the stamp. Finally, the dimensions are different: 18.7 x 22.2 instead of 18.4 x 22.4 mm).

The use of this stamp was very short because it was detected almost as soon as it appeared. The director of the post office of Mascara (Algeria) drew up a note on Feb. 26, 1876 to announce its existence after having on his desk several letters franked with this forgery all coming from Oran.

Most of the letters don’t have the canceled stamp because the postmen instantly spotted the deception. They are “marked” by the post office as being franked with a counterfeit stamp and taxed 4 decimes (40 centimes).

And under the law of Oct. 16, 1849, this fraudulent use becomes an offense and a report is drawn up. 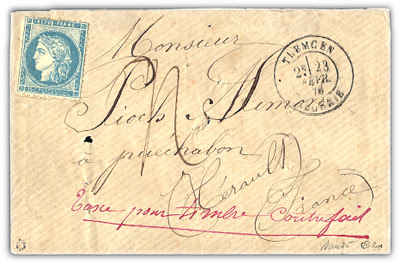 5- In search of its origin

The magazine "L’Echo de la Timbrologie" gives some information in an article in its issue of Dec. 31, 1943.

The public prosecutor in Oran was seized of the case. On March 3, 1876, the chief controller of the postal service of the province of Oran sent him two forgeries. The postmaster specified that these stamps had been delivered to the office of Oran by the postilion of the coach which made the daily connection between Oran and Misserghin. These stamps had been bought (whose ? the article doesn’t specify...) by the postilion in Saint-Faget on behalf of Mrs. Juc living in Pont-Albin.

The postilion had acted in this way at the instigation of the controller, who had been alerted by the appearance of the false stamps in order to locate their origin as precisely as possible and identify the people who put them into circulation.

Unfortunately, the investigation stops there. The author of this article in "L'écho de la Timbrologie" ends the story without further information. The end of the investigation isn't known and it may never have found the culprits...
If anyone has more information on this story, please let me know.