This article gives details on the book by Sperati which follows on from “La Philatélie sans Experts” (see my article about this book) and which has never been officially published. Some time ago I acquired a copy of this book titled "La technique complète de la Philatélie d’Art » which can be translate as "The Complete Technique of Art Philately".

3- The different categories of books

At the age of 69, Jean de Sperati wishes to leave a technical testament which he also calls a cerebral testament whose content will be dedicated to his art of philatelic counterfeiting.

This book was to be reserved for experts and stamp dealers and be entitled “Confidences aux experts”. Sperati began writing this book years ago. His project wasn’t to meet the needs of a cause or to justify a behavior or a choice of life. It is a 120-page compendium of the secrets of Sperati, the secrets of an unrivaled philatelic forger.

To finance the printing of his book, Sperati launched a subscription in 1946, hoping that the first interested in his book would be philatelic experts. A little before the closing of the subscription which was to take place on November 30, 1946, Sperati regretted that no expert had subscribed to his work, which in fact led to financial difficulties in publishing the book.

The particular character of Sperati had led him into a total denial vis-à-vis the image he could have with philatelic professionals. How the profession could welcome a counterfeiter who undermined philately by implying that nothing should prevent counterfeiters from producing copies of stamps as one copies antique furniture or paintings by old masters.

3- The different categories of books

The book had to exist in two categories if we exclude those drawn from a few so-called luxury copies which can be counted on the fingers of one hand (three known to my knowledge, including the copy given to his daughter Yvonne which was stolen in 1967 then "emerged" from the shadows in New York in an auction canceled in 2003 to be returned to its owner) including real copies.

Two categories therefore, one with no copy image but only the explanations that allowed their realization and another with the explanations and a quality impression allowing to see the famous copies (+200 forgeries in total).

4500 francs of the time was necessary to acquire the book containing only the explanations and therefore without illustrations. By way of comparison, the Maury catalog of this period, with illustrations, cost 3500 francs. This one was to be printed in 280 copies, numbered from 1 to 280.

The one with illustrations cost 5800 francs and had to be printed in 100 copies numbered in Roman numerals from I to C.

The subscription initially offered a deluxe copy for 185,000 francs. Very quickly, Ernst Kottelat, a Swiss, acquired it. As early as 1947, Mr. Kottelat showed his acquisition to the Philatelic Society of Geneva and Dr. Fulpius appraised the 225 forgeries it contained. His expertise was reported in the newspaper Schweiser Briefmarken-Zeitung (see below). 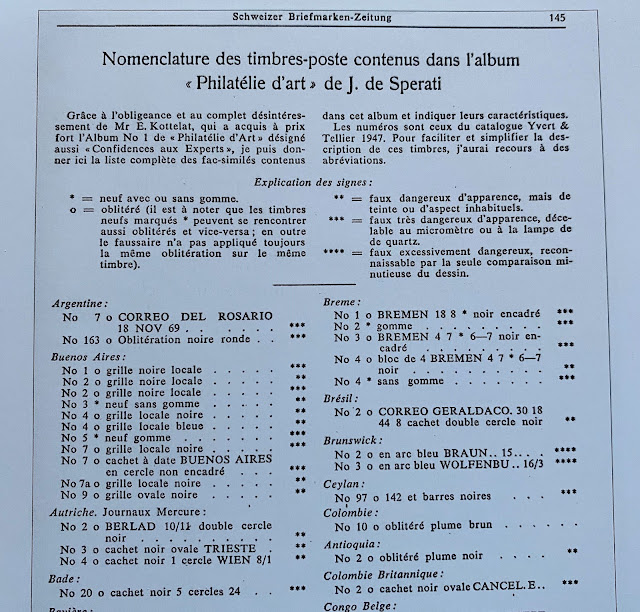 Faced with the failure of sales and above all the reluctance of experts to take an interest in his project, Sperati slightly transformed the content of his book, which was initially to be called "Confidences aux experts" into "La technique complète de la philately d'Art” whose important difference was that it will delete the chapter evoking the means of detecting fakes. Copies will be sold by Sperati until his death without it being known today how many were in circulation. 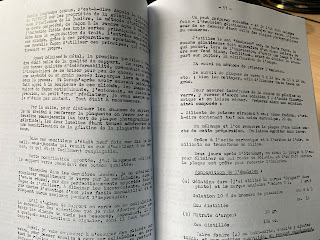 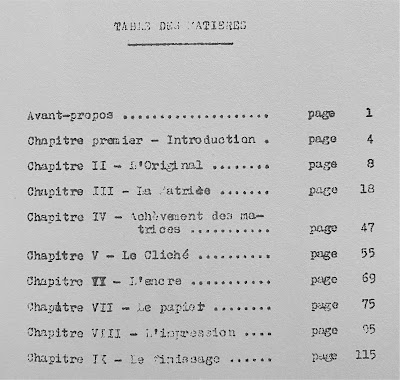 This chapter deals with the contents of the book in my possession. This is a copy without illustrations but still includes a few rare diagrams. 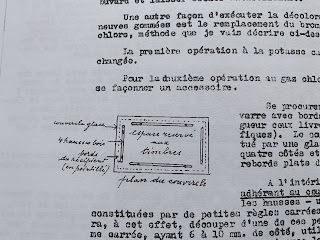 This book is in French and it was typed. Sperati's foreword is dated November 1953, which may show that it is indeed a copy that has been remodeled from the initial project.

Sperati, from the beginning of his book, takes up his favorite subject which is to say that the expertises aren’t reliable and that if his first book (La philatélie sans expert?) was addressed to beginners, his last book is addressed to experts.

Here is a summary of the different chapters of the book:

Chapter 2: choose the original, often a stamp with a slight cancellation, to make the matrix that will be used to make the copy.

Chapter 3 to 5: creation of the matrix and the final plate by the collotype process which is a process of printing with oily ink using dichromated gelatin and exposed on a glass plate. This process allows non-rasterized continuous pattern rendering. The collotype was the main mode of printing postcards until the 1930s.

Chapter 6: ink or colors, consisting of insoluble powder, distinction between covering colors and transparent ones. Its range of shades is impressive, 11 for red, 9 for blue, etc. Sperati prepared his own inks based on dry dyes which he finely ground and dosed according to the desired color. He used very little commercial ink.

Chapter 7: preparation and tinting of the paper that makes up the stamps. Sperati had stocks of archives, letters, books made between 1830 and 1870 which served as support. He also sometimes washed with chemicals the perforated stamps having little value to use as a support.

Chapter 8: the printing takes place on a marble, the negatives representing the drawing in a tiny hollow are inked with the fingers for the little ones or with a roller for the bigger ones. The plate, once inked, is subjected to pressure (arm press or vertical displacement press) to discharge all of its ink onto the paper. I go through the countless adjustment operations detailed in the book. For the cancellations, the same principle is adopted with less thoroughness since the cancellations are in essence all different and coarser. The cancellations are aged for a more realistic look.

Chapter 9: the finishing. The paper is cut and the edges "aged" with fine dust. Some editing can be done.

This book is interesting for those who wish to understand how Sperati made his copies. For my part, my knowledge of chemistry doesn’t allow me to appreciate and understand all of its content. Sperati used countless chemicals for his work, it was even thought that these were the chemicals that killed him!

The processes are explained in detail but there may be a lack of illustrations or photos to understand this complex work. Interesting passages on colors can provide the collector with some important information in this area. Sperati was also an outstanding colorist, because often the color of a timbre is very difficult to imitate.

His book shows above all the complexity of the forgery work accomplished by this man who maintained that he had never sold one of his copies as a real one. His work required a mastery of knowledge of different fields such as chemistry, photoengraving, drawing, printing and of course undeniable artistic qualities.

His book isn’t a recipe book for making fake stamps but the culmination of a lifetime's work.