This article deals with stamps used in the French colonies before 1880.

The French postal administration announced the sending of stamps for the French colonies on June 13, 1851.

The West Indies (Martinique and Guadeloupe), Guyana, India and Reunion received Cérès stamps of the 1st issue to frank mail.

Today, letters with these stamps are rare and of great value.

It is important to note that it isn’t possible to distinguish the stamps used from the colonies if they aren't on letters since these were canceled by the main post office in Paris. These cancellations were therefore the same as those of the stamps used from mainland France to abroad.

End of the 1850s, Cochinchina, under French domination, received French stamps of the 1853 type (Empire not laureate and imperforate) to frank the mail.

In June 1859, a stamp specially created for all the French colonies was issued. 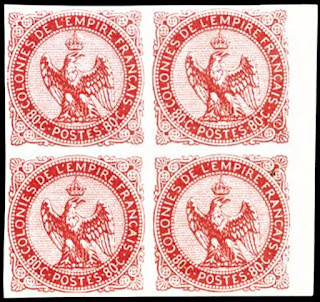 This is the Eagle (« Aigle ») type that is called "general emissions". These stamps will be printed until 1865 and send to colonies until December 1869.

Unlike the 1st Cérès issue which were canceled in France, the stamps used from 1856 are canceled with identifiable diamonds either by their dots and their shape or by letters. See some examples below:

The Eagle type stamp was withdrawn from sales on September 4, 1871 because it was too reminiscent of the emblem of the regime which has just been abolished. Indeed, Napoleon III is deposed and the 3rd Republic is proclaimed.

Paradoxically, the stamps with the effigy of Napoleon III replaced the type eagle. The stamps with republican effigy (Cérès) were also used. 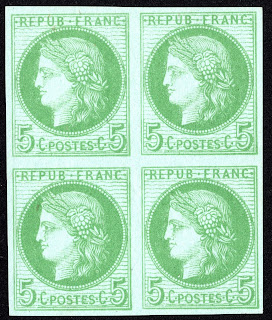 These stamps weren't perforated like those of the metropolis. The reason given is that they had to be distinguished from metropolitan stamps. The most likely reasons are certainly to save money by eliminating the perforation step and perhaps also to avoid weakening them with perforations knowing that they could be stored and then detached in conditions of high humidity.

In 1876, the stamps of the colonies were replaced, as in metropolitan France, by those of the Sage type.

End of the 1870s until the end of the 80s, shortages of stamps in certain colonies led to the use of Ceres type stamps which remained in stock, they were overprinted.

In my opinion the most complete reference on the stamps of the French colonies (stamps & cancellations):