This article deals with a letter sent from Crimea in May 1855 by a French officer during the conflict between Russia and a coalition of which the French Empire was a part. This is probably the last letter that this officer sent to his family.

1 – Context of the Crimean War

2 – “Postal” aspects of the letter

1 – Context of the Crimean War 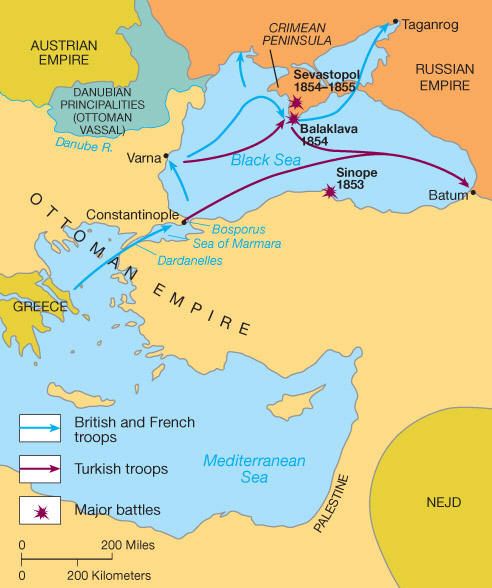 The Crimean War between 1853 and 1856 opposed the Russian Empire to a coalition formed mainly of the Ottoman Empire, the French Empire and Great Britain. The official motives are derisory: a dispute between Tsar Nicolas I and Napoleon III over the protection of Christian holy sites in the Middle East. But the real stakes were the Russian expansionism towards the Mediterranean and the fear of a collapse of the Ottoman Empire, the conflict took place mainly in Crimea around the naval base of Sevastopol. It ended with the defeat of Russia, ratified by the Treaty of Paris in 1856.

2 – “Postal” aspects of the letter

The letter was sent from Sevastopol (probably written in the trenches near this city) then was transported by the postal services of the Armies of the French Empire to Constantinople before following the usual route for mail transported by French from Le Levant to France.
The letter is dated May 14, 1855 and the CDS May 15.

The sender benefits from the rate granted to the military, i.e. the same rate as an unstamped letter sent from France to France, i.e. 30 cents (double line tax stamp 30c).

The letter was written by Jean Marie de Garnier des Garets, second lieutenant of infantry in the French imperial army.

It is a mourning letter. The envelope and the letter are surrounded by a black border. This officer writes to his sister Aimée, and empathizes with the recent loss of her young child.

He was injured because he explains that he can now write normally since the bandages on his hands were removed. Aimée, the officer's sister, bears the title of Countess of Montbrian. She has been married since 1849 to Count Charles Leviste de Montbrian.

He evokes the war in Crimea to say that it isn’t about to end. He writes that the situation near Sebastopol is a real Gordian knot and he criticizes the general-in-chief commanding the troops (editor's note: General François Certain de Canrobert) by saying that it will not be him who will cut it. He says that this general has shown weakness and the whole army is furious with him.

It evokes the siege of the city of Sevastopol and the expectation of the army which without attacking loses more men than in a real battle. He castigates the general staff who don’t know the difficult living conditions in the trenches. He even underlines a sentence, perhaps a quote taken from Napoleon III: « the army of Orient is an army of lions commanded by donkeys » (see below in French).

For him, all generals are incompetent except “Father” Pélissier. This general will be promoted Marshal of France on September 12, 1855 at the fall of Sebastopol.

The letter ends with tender thoughts to pass on to the whole family.

The writer of the letter, Jean Marie de Garnier des Garets, born March 8, 1832, came from a family of French nobility. In the pure tradition of these French families, he embraced a military career. He joined the prestigious Saint-Cyr school and was part of the class of the Empire (1852-1854) thus named following the restoration of the Empire, on December 2, 1852, by the Prince-President, Louis-Napoleon, Emperor of the French under the name of Napoleon III.

Jean Marie de Garnier des Garets was a very young infantry second lieutenant just out of school. One can imagine the shock he experienced when he found himself in the trenches of Sevastopol, far from home and in atrocious conditions. Of the students of the class of the Empire (1852-54), therefore students with whom Jean Marie shared his initial military training, 17 died in Crimea. 17 young officers, of which the writer of this letter is unfortunately one.

Jean Marie de Garnier des Garets died in action ("au champ d'honneur") during the siege of Sevastopol on May 26, 1855, 12 days after writing this letter, he was 23 years old. No information can give the cause of his death which may be due to the enemy or cholera.

Casualties include death by disease, especially cholera because the hygienic conditions were appalling. Death by disease exceeded the sum of killed in action or died of wounds.

This article is in a way a tribute to this officer whom I had the honor of meeting, 167 years apart, through a letter.