The déboursé postmarks aren’t common postmarks. They are scarce more then departure marks for unpaid letters and prepaid marks. These postmarks are highly sought after by collectors and their price is significant.

This article tries to explain what is a déboursé.

3 - The end of the postmark déboursé

From the beginning of the post service, most mail was sent unpaid and the addressee was obliged to pay the postage if he wanted to read the letter.

Some letters were paid before (prepaid) but a large majority was send unpaid.

The postage was calculated as a function of distance and weight. These letters were transported as debits by the central post officie against the account of the distribution office until such time as they were paid for by the addressees. The master of each post office transferred the money collected to the central post office in Paris to cancel the debit against each office. 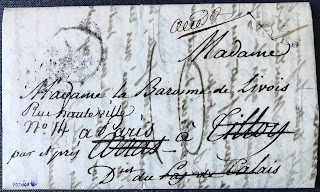 But when an unpaid letter became undeliverable because the addressee refused to pay the postage due, or was unknown, or deceased, or had left without a forwarding address, the letter had to be forwarded to the dead-letter office called « rébuts ».

Due to this, the post office accounts of such letters would not balance. These unpaid amounts due to these letters were called déboursé.

All letters corresponding to these amounts unpaid were all marked on the reverse by a déboursé postmark bearing the name of the distribution post office. These postmarks were written at the beginning then each post office received its special stamp.

In addition, a report was made to the central authority for each "déboursé". This postmark allowed the postmaster to transfer the debit resulting from these letters from the account book.

Before 1792,  all marks were in manuscript. They indicated « déboursé de » or « déb de » and the name of the distribution office.

After 1792, the central postal autohrity provided for each post office a « special » stamp déboursé.

3 - End of the postmark déboursé

In 1830, the circular date stamp was in used by French post and no consideration seem to have been made for déboursé letters.

Surprisingly, the name « déboursé » does not even be mentionned in the 1833 edition of « Instruction générale sur le service des postes ». So the name had definitively disappeared from the French post History. Although this "disparition", the procedure for undeliverable letters stayed inchanged.

The procedure was the same until July 1849 when the distance/weight for the calculation of postage disappear. Letters could then be moved within the system in bulk rather than as single pieces. Under these conditions, a forwarded letter need only be re-addressed and sent on without any surchage or complicating paperwork.