In order to explain their functions and differences, I will rely on the history of the 1st post office of a town in Northern France called Bruay.

The first post office of Bruay, under the pressure of the mining company, opened its doors in March 1872. It was located opposite the headquarters of the administrative mining services.

This 1st post office of Bruay was a « bureau de distribution », its postal services were limited, it could only receive and send mail. It was a type of annexe of direction office. That of Bruay depended on Houdain's main office (see map of this article), which could carryed out all postal operations of this time such as money orders for example.

Letters sent from these « distribution » offices were less numerous compared to the direction offices. They are therefore very sought after, some are worth a real fortune. 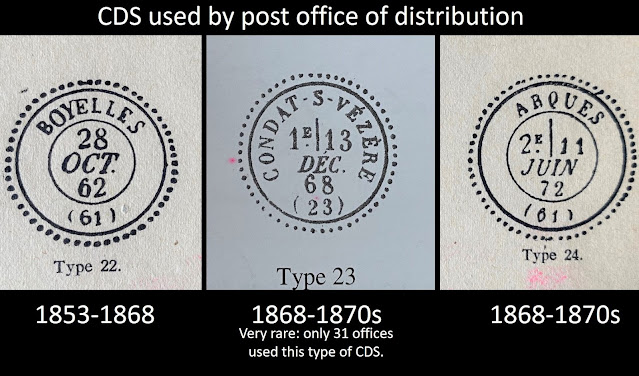 The number 6157 of the canceling lozenge was assigned to the office of Bruay. The big numeral 6157 of Bruay has an index of 9, common according to the Pothion catalogue (index 39 is the scarcest). The catalog below by assigning an index for each office gives an idea of the rarity.

Note: the office of Bruay (1872) never had a lozenge small numeral since in 1862 it was replaced by the big numeral.

In the early 1870s, mining production was booming in France. The city of Bruay was becoming a important town and its post office had to adapt to this industrial growth which led to more professional postal exchanges requiring new postal services.

This type of office is run by a director aided by one or more employees. Postal services such as registered, insured and money order mail could be provided. One accounting office was linked with this office. 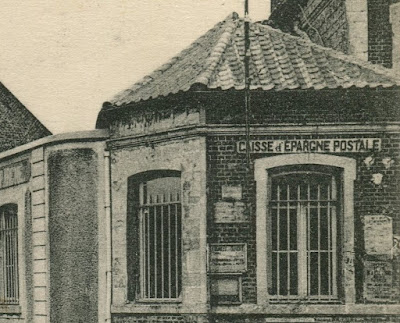 Simple people could invest their money at an interesting and safe rate, thus without risk of loss. Interest was calculated at the rate of 3.5% from the 1st to the 16th of each month.

The post office of Bruay, located rue de la Gendarmerie (today rue Caudron), remained at this location until 1916 then was transferred to the opposite of the current town hall of Bruay.

When Bruay didn’t yet have a post office, the mail was distributed by a postman of the office of Houdain opened since 1841. It depended on that of Béthune (see map).

Below is a letter written in 1865 and posted in « rural » postbox E which was to correspond to that of Bruay.

This letter was taken in a postbox located in Bruay by a postman of Houdain who was making his rounds.
There isn’t official documentation of the location of the rural boxes and therefore this one, like many others, cannot be located, except if the content gives a clue where the letter was written as is the case here.
To be rigorous, it would be necessary to find several letters around same date with same location and postmark to confirm this information. The round of the factors could be modified by the addition of new postboxes and the letters associated with postboxes as well. It isn't easy to have an exact cartography of the location of rural postboxes, but postal history enthusiasts have succeeded for a geographical area given to draw up fairly precise cards that can be found in unofficial documents.