STAMPS IN THE VIEWFINDER

This page is dedicated to my stamps or their cancellation on which I have a doubt concerning their precise identification. Your comments are welcome if you have interesting information.

A/ Stamps which issue can't be clearly defined 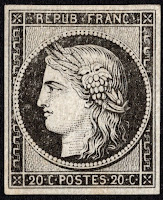 Problematic: purchased from a seller as being a make-ready ("mise en train") but specialised Yvert & Tellier catalogue indiques that none make-ready was find for this 1st issue. 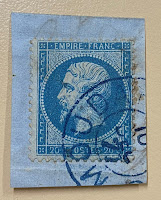 Proposed solutions: 1/ Private cancellation ; 2/ Cancelled abroad but not matching with known one ; 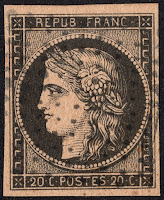 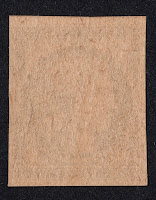 Problematic: cancellation unknown of misaligned & different sized dots + paper with too much impurity, slightly too thick.

Proposed solution: 1/ forgery with fake cancellation, lithography instead of typography. 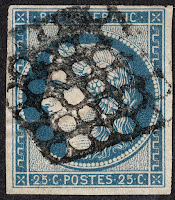 1/ Characteristic grid of Châteauroux, but only known on black Ceres Y&T #3, Sc. #3 + used at the beginning of 1849 well before the issue of this stamp. Perhaps a late use such as New Year's Day where the large flow of mail to be processed requires a reinforcement of personnel who are equipped with old or makeshift cancellation "tools".

2/ Worn normal grid + a lot of ink, which leaves a grid imprint with rounded corners. 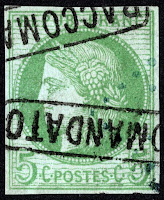 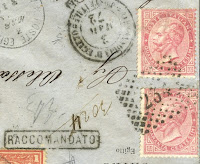 Proposed solution: 1/ A stamp, among other surely, used on registered mail from a French colony to Italia and cancelled in post office on arrival (double RACCOMANDATO). Blue cancellation with lozenge of dots used at departure of the French colony is visible.